The Historic Barn – Garth Oberlander Barn – was graced for many years by four “Hex Signs”, seen in this 1950’s photograph. The “Hex” signs painted on metal disks three foot across show symbols of protection and blessing for the farm. 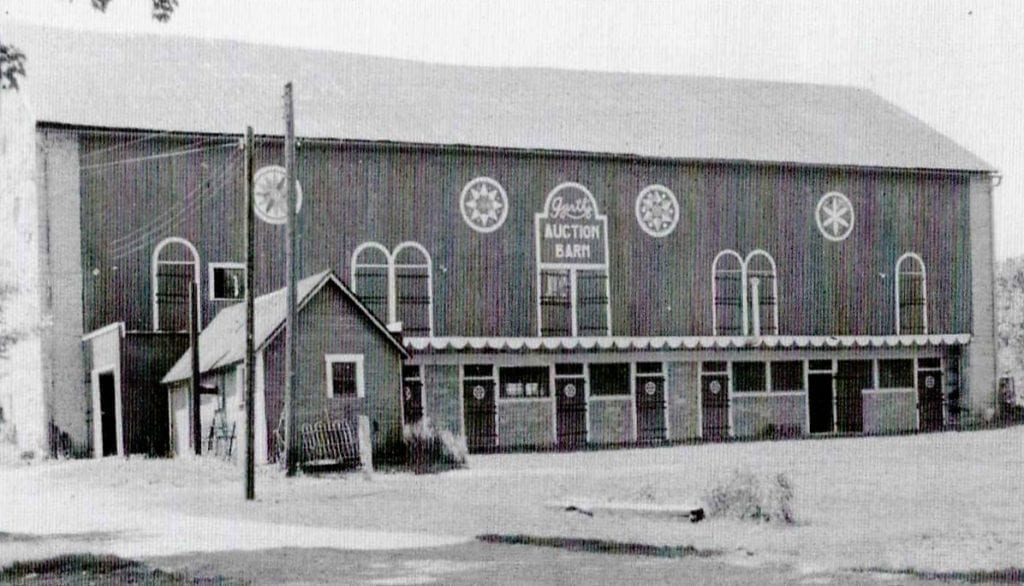 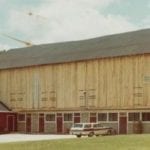 You would not have seen the signs if you passed by this Delaware landmark in recent years.

Around 1970, the barn’s wooden siding was removed and replaced (seen here before painting).  The four circular signs were taken down as part of that work. They have not been seen since and were presumed lost.

In 2016, the Delaware County Historical Society assumed management of the Meeker property including the barn. Garth’s Auctions will continue to offer auctions and appraisals during 2016 by agreement.

During a survey of the property, The Barn at Stratford Venue Manager Connie Hoffman discovered the four painted metal signs in the barn’s long abandoned loft. Mike Hoffman(holding sign) was quickly recruited to retrieve the signs from the loft. 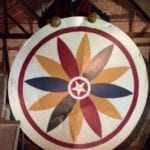 Two of the signs were in good condition. They only needed cleaning and straightening. 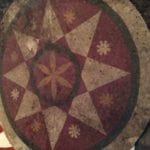 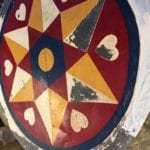 The other two signs needed thorough cleaning. Once cleaned, it was revealed that the paint on these two signs was flaking and peeling from exposure. 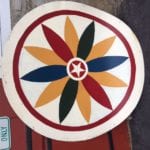 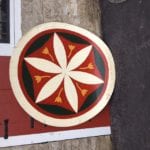 Connie reported “I had to restore 2 of the 4, the bat poo had taken off lots of paint. I spent weekend hours doing it, it cost the society around $30 for the paint.” Each symbol on each sign had to be carefully drawn. Then each element of each sign was repainted with color-matched paint. 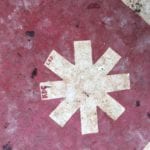 Inside one of the signs is this white symbol with the initials KDC and LRB on two of the strips.
Whose initials are they and what do they mean?

Connie contacted Tom King, who worked for Garths for many years. We learned from Tom that the signs were removed from the barn when the siding was replaced during the 70’s. Tom said “From what I understand they were repainted by the 2 girls at that time, really don’t know if they were ever put back up at any time.”

Tom referred Connie to Kathy Creasy (initials KDC). Kathy said “Yes, I remember drawing and painting those signs years ago — with Lucy Brink (now Lucy Beck).”  “I called her and both of us are  delighted that they might go back up.” Ah Ha!, Lucy is the second girl, The LRB.

The Historic Barn with its “Hex”Signs Returned 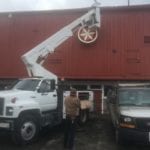 The Society hired Delaware resident Evan Kready to bring in his lift truck and return the restored signs. On Feb 11, 2016, the long lost “hex” signs were restored to their proper place.  Visit the Historic Garth Oberlander Barn – The Barn at Stratford – and see the restored Hex sign.

For driving directions see Our Location.